Oh, gender definitely factors in. girls are more likely to receive blame even if theyre not older… 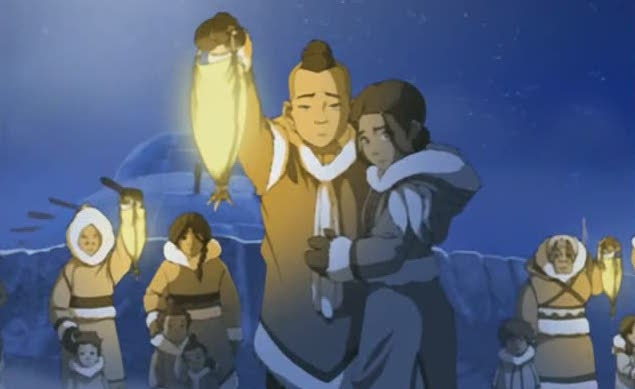 Oh, gender definitely factors in. girls are more likely to receive blame even if theyre not older, as theyre still expected to be “more mature.” but in the case of katara and sokka, while katara does point out the double standard of the responsibilities she has to take on, sokka is indisputably the older sibling. katara is maternal, granted, but she is rash, impulsive, and emotionally-expressive in a way that sokka cannot be, because he feels that she is his responsibility.  it is clear that sokka is the eldest of the group, and is not unused to being the eldest, because he has a complex wherein he considers everyone to be “his responsibility.” this means that if someone he remotely cares about is hurt, even if it is beyond his control, he will immediately take the blame (it is one of his most classic Sokkas Instincts™️). he feels guilt over yues death, feels guilt over not being able to protect suki, is always making sure that aang and toph are safe, and most importantly, is prepared to murder anyone who so much as lays a finger on katara. when aang accidentally burns her, sokka only forgave him once he was convinced that katara was okay, and the fact that aang was clearly distraught and penitent barely mattered. sokka inherently feels a responsibility to prioritize everyone else before himself, and though katara is obviously deeply caring and compassionate, she does not possess this quality in this way. katara has the youngest sibling syndrome of thinking that she is the protagonist of her life, and everyone else is a side character. (and, yknow, on a meta-level, she wouldnt be wrong seeing as she is literally the narrator.) in contrast, sokka doesnt see life as a narrative at all, but merely a series of randomly occurring events that can simply be manipulated to the benefit of whomever can best play the game. (but thats for another time.) this is the first image we see of them, and it is from kataras pov. look at the framing of this. the elders holding out lights while the children stay close to them. katara is holding onto sokka, but sokka is reaching out ahead, bearing the lantern in the absence of their parents.  whats so fascinating to me about katara and sokkas dynamic is how they are basically opposites, and they balance each other out and rely on each other. katara is very shrewd when it comes to survival, and her short-term foresight keeps her alive; even if she wont to dive in headfirst regardless, she is aware of the danger. but for all that she is attentive in the moment, she always relies on sokka for longterm planning. conversely, sokka is cerebral to a fault. he can make a masterful schedule, but he sees a cactus in the desert and immediately drinks it without first considering whether it contains hallucinogens. (ironically, katara could probably have filtered the water, wherein they would all have enough to drink, but i suppose the desert had gotten to both of their heads at that point.) katara and sokka need each other because each has traits, flaws, and virtues the other does not.  at this point, its not a matter of age, but simply personality. katara is more practical, more action-oriented and emotions-driven, whereas sokka is more intellectual––even in the way he fights, his greatest weapon is his intelligence. and you cant claim thats gendered, either, because atla also gives us the reverse, with azula and zuko in place as foils. zuko is also the older brother, but his instincts fall far more in line with kataras: emotions-driven, quick to action, details-focused. it is why he works so well with sokka. alternately, azula is much more like sokka when she fights: strategic, rational, precise. she thinks multiple steps ahead, and uses her surroundings to her advantage. piandao cites “creativity, versatility, intelligence,” as sokkas greatest strengths, and they are what make azula so powerful as well. it is why she is so quick to recognize sokka as a threat––because she has never actually had to go up against someone who knows to anticipate her. zuko could never get the upper hand on azula––at best, they were evenly matched––but on the gondola, he manages not to lose to her because sokka is there, actively restraining himself from hurting her. when zuko and katara fight azula in the final agni kai, zuko only knows he can take her on one on one because she is no longer employing her trademark precision and foresight; she is far more erratic, far more like how zuko usually fights her. ultimately, it is katara who beats her by using not her strength, but her creativity––a strategy. as long feng would say, she beat her at her own game. zukos original little sister: 0; zukos new, cooler little sister: 1.