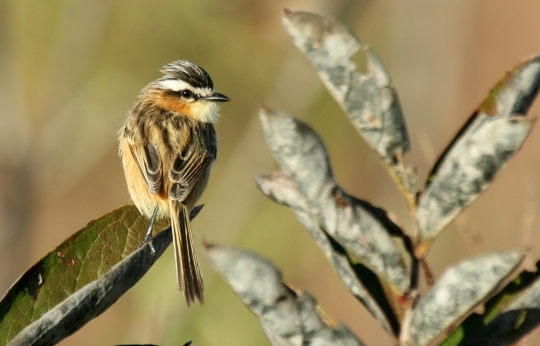 Etymology: Devourer of Midges First Described By: Swainson, 1827 Classification: Dinosauromorpha, Dinosauriformes, Dracohors, Dinosauria, Saurischia, Eusaurischia, Theropoda, Neotheropoda, Averostra, Tetanurae, Orionides, Avetheropoda, Coelurosauria, Tyrannoraptora, Maniraptoromorpha, Maniraptoriformes, Maniraptora, Pennaraptora, Paraves, Eumaniraptora, Averaptora, Avialae, Euavialae, Avebrevicauda, Pygostaylia, Ornithothoraces, Euornithes, Ornithuromorpha, Ornithurae, Neornithes, Neognathae, Neoaves, Inopinaves, Telluraves, Australaves, Eufalconimorphae, Psittacopasserae, Passeriformes, Eupasseres, Tyranni, Tyrannides, Tyrannida, Tyrannidae Status: Extant, Vulnerable Time and Place: Within the last 10,000 years, in the Holocene of the Quaternary  The Sharp-Tailed Grass Tyrant is known from central South America, mainly around the southern part of the Amazon basin  Physical Description: The Sharp-Tailed Grass-Tyrant is a small perching bird, only about 10 centimeters long. Most of that length, furthermore, is tail; it has a long, pointy, dark tail extending from a very round body. This bird has a brown and black striped back, heavier on the brown stripes; the black stripes become more dominant as the striping extends to the wings. The body of the bird is brown, which transitions to white across the belly and neck; there are brown and white stripes on the back of the neck, transitioning to a black top on its head. There are white and black stripes around its eye, and it has a short, black beak. It is, in general, a very fluffy bird, and has distinctive stripes and patterns all over its body. The sexes look alike.   Diet: The Sharp-Tailed Grass-Tyrant feeds primarily on insects, but may supplement with seeds.  Behavior: The Sharp-Tailed Grass-Tyrant forages in mated pairs or small, related, tightly-knit groups of up to five individuals. They will sometimes join mixed-species flocks to forage for insects together, but thats rare. They perch on vertical stems and shrubs, especially exposed weeds and clumps of grass. Theyll even hang upside-down to grab food and pick at growing seedheads and creeping insects. As they forage, they make small whistles to one another, and can duet with a potential mate using rapid chip tweets. Sometimes, tick sounds are made by juveniles imitating their parents. These birds mate from October through March and make nests out of grass and thistles, forming an open cub thats placed in shrubs near the ground. They lay three eggs at a time. These birds do not migrate, but stay in the same range for their whole lives. Ecosystem: The Sharp-Tailed Grass-Tyrant mainly lives in dry grassland, though it can venture to wetter portions of grassland near shrubby marsh and streams. They usually are found in the lowlands, rarely above 1000 meters in elevation. Other: The Sharp-Tailed Grass-Tyrant is considered vulnerable to extinction because of its rarity, isolated ranges for each population with little go-between, and major habitat loss. Large-scale farming and cultivation has destroyed most of the Sharp-Tailed Grass-Tyrants ecosystems. ~ By Meig Dickson Sources under the Cut  Fitzpatrick, J. & de Juana, E. (2019). Sharp-tailed Tyrant (Culicivora caudacuta). In: del Hoyo, J., Elliott, A., Sargatal, J., Christie, D.A. & de Juana, E. (eds.). Handbook of the Birds of the World Alive. Lynx Edicions, Barcelona. Jobling, J. A. 2010. The Helm Dictionary of Scientific Bird Names. Christopher Helm Publishing, A&C Black Publishers Ltd, London. 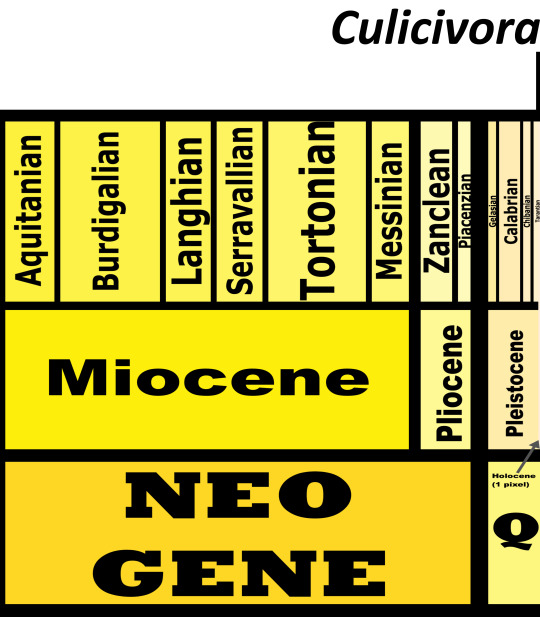 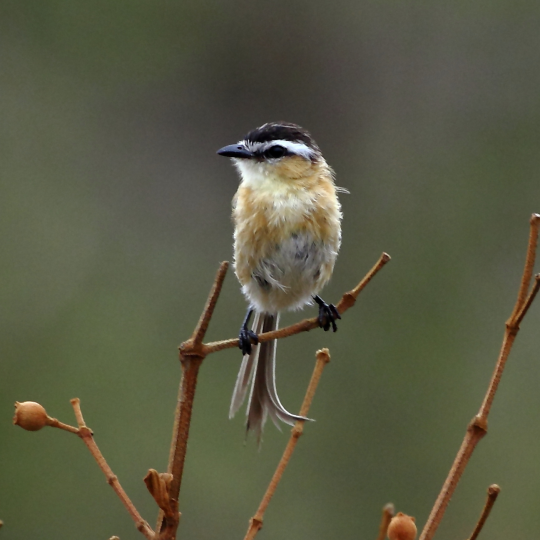